Today I am delighted to be taking part in the blog tour for The Orphan Thief by Glynis Peters and am thrilled to be able to share an extract with you.  Read on dear reader, read on.

Many thanks to Anne Cater for inviting me to take part in this blog tour.

From the international bestselling author of The Secret Orphan

When all seems lost…

As Hitler’s bombs rain down on a battered and beleaguered Britain, Ruby Shadwell is dealt the most devastating blow – her entire family lost during the Coventry Blitz.
Hope still survives…

Alone and with the city in chaos, Ruby is determined to survive this war and rebuild her life.  And a chance encounter with street urchin Tommy gives Ruby just the chance she needs…

And love will overcome.

Because Tommy brings with him Canadian Sergeant Jean-Paul Clayton.  Jean-Paul is drawn to Ruby and wants to help her, but Ruby cannot bear another loss.

Can love bloom amidst the ruins?  Or will the war take Ruby’s last chance at happiness too? 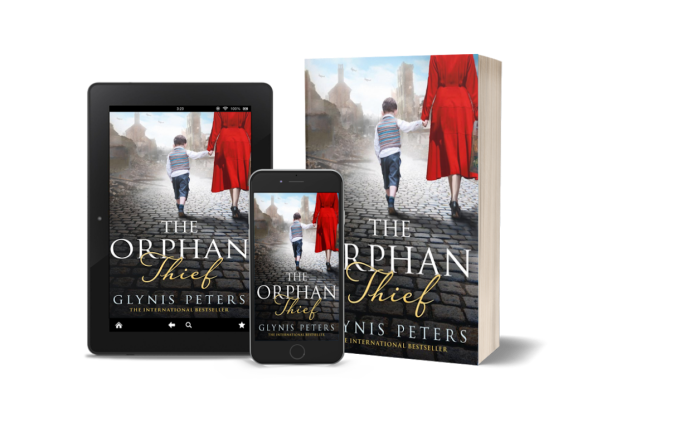 The Orphan Thief by Glynis Peters

PROLOGUE
Coventry, 25th December 1938
The table, laden with fresh vegetables and a rib of beef, filled the room. Chairs sat around it, seating her favourite people. Ruby Shadwell watched on as they ate and chatted about the previous Christmas, when the table had held two other elders of her family – both grand-fathers.

Although both had been loved, they were also remembered for their dour outlook on life. No one banged the table for silence today, and Ruby slipped into a relaxed position in her seat. Her gran praised her parents for such a feast, her siblings drooled as her father sliced the meat onto a large platter and her mother, pretty in
her new dress, trotted back and forth from the kitchen. Ruby studied her family as they moved through the day. Her father, over-polite to his mother-in-law and extra friendly to the children, with praise for her, and she even saw him kiss the cheek of her mother. He’d planned their day with great precision and not a minute
was wasted.

They played games of charades after the meal and sang carols around the fire during the evening. They sat in silence and listened to her young sister Lucy recite a poem, and smiled when her brother gave a pretend snore at the end of it, earning himself a gentle clip around the ear from their father.
Boxing Day would be a day of rest too and their father had promised them a day much like their Christmas Day. Ruby looked forward to reading a good book rather than planting out or pulling up vegetables to sell in the family shop, but she couldn’t quite believe her father would honour his declaration. Contentment resonated around the room, but there was a darkness hovering over the adults too.
War loomed, but not a word was spoken about it during their special day. But once the two youngest of their children had given into sleep, the adults renewed their concerns about Hitler and his desire to hold power over Europe.

At fourteen, Ruby understood the implications of war. Her grandfathers and her father had already fought in one, and she’d witnessed men who’d lost limbs, or who choked still on gassed out lungs. Ruby knew if she sat and listened, her father often forgot she was in the room and broadened his views on the current situation. Today he didn’t fail her, and she hung onto his every word. Ruby knew dark days were around the corner, but when it was due to happen was down to politicians at home
and abroad. The Shadwell family could only sit in hope it wouldn’t disturb the balance of their peaceful lives.

Jean-­Paul Clayton Junior watched his father dip the negative into the solution. Their darkroom housed many dripping negatives waiting to share what the two men had captured through their lens.

Photography was Jean-­Paul’s passion and his father’s hobby, so when he’d mentioned his intention to leave
the banking sector to take up photography full-­time, this had not gone down well with his parents. At nineteen, although he wanted to rebel, he took their advice to continue earning and build a portfolio of work which might stand him in better stead for when he took it up as a permanent career.
Today, he unwrapped their gift to him, one which showed they understood his restlessness. He now owned one of the latest cameras and a ticket to travel throughout Canada. With news of the war brewing in Europe, his parents wanted him to have an adventure during his summer break. His sister received jewellery, which delighted her as much as his gift did him, but Jean-­Paul knew his gift would never go out of fashion.

A camera would always capture life through a lens and Jean-­Paul intended never to miss a moment.

Ruby Shadwell stared out into the street, blinked away her disbelief and then looked down once again into darkness over the edge of a large smoking crater. A flash of light from the rising sun emerging from behind a cloud skimmed across scattered shards of glass, giving her an insight as to what was below. The epicentre
of horror.

The place her parents and two siblings would have sat enjoying their cocoa around the fire, as they did every night. Ruby had no doubt their routine hadn’t altered despite the air raid warnings.

Even if they had been in the Anderson shelter at the bottom of the garden, the scene before her would be the same. Total devastation. Her family crushed to death like ants under the foot of a human.

White-grey flakes fluttered from the sky. She held out her hand. It wasn’t snow, but something like the ash from the fireplace in their house. The house which no longer existed.

Ruby wrapped her arms around her chest and shoulders and gripped hard, digging her fingers into her flesh through the woollen coat she wore. At sixteen, she could not recall a pain so deep, even when her precious grandfather had passed away. Unable to absorb the enormity of the disaster, she remained staring downwards into the crater in the hope it could be a dream. She’d even accept a nightmare. One from which her family clawed their way back to the surface. Back into her life.

Her body, freezing with the November frost and easterly wind, felt stiff and bruised. Heavy drizzle dripped across her face and she brushed it away, her skin sore with cold, but she was unable to move away from the place she once knew as home. How had it come to this?

Walking home from Lammas Road, Ruby had witnessed the first of the bombs before a warden had grabbed her arm and took her at great speed to the public shelter underneath Radford Common. Someone gave the time as seven-­twelve when the sirens blasted their warning around the city. They ran past the group and towards the shelter, the warden shouting for them to run faster. An elderly lady stumbled
and the warden left Ruby in order to help. The enemy attacked before the wailing of the siren had stopped. Ruby screamed as a bomb dropped on the rooftops of a nearby street.

A feeling more than the fear of the bogeyman forced her onwards – it sickened her to think she was streets away from the comfort of her family. Her lungs burned with the cold of the evening air and by the time she made it into the shelter, huddled amongst strangers and a few familiar faces, more bombs had fallen. Too many to count, too many to ignore.

Everyone waited for the all clear to sound. It never rang out, but the reassurances and door-­banging from ARP wardens now that the raid was over came as a huge relief. The warden seeing them out of the shelter warned people to be careful of fires and unexplored bombs, and that electricity was no longer on supply. Ruby moved forward in the queue to leave and was stunned by what she saw as she stepped outside. Enemy bombs had proved themselves to be powerful and destructive – they’d destroyed Coventry.

Glynis Peters, lives in Dovercourt, Essex, England. She married her school sweetheart in 1979, and they have three children. They also have three grandchildren, with another due in the spring of 2019, the year of their ruby wedding Anniversary.
​
In 2014, Glynis was short-listed for the Festival of Romantic Fiction New Talent Award.
​
In 2018, HarperCollins/HarperImpulse published her novel, The Secret Orphan. The novel rose to several bestseller positions within a few months of release.
​
When Glynis is not writing she enjoys fishing with her husband, making greetings cards, cross stitch and the company of her granddaughters.

Her grandson lives in Canada, and it is for that reason she  introduced a Canadian pilot into The Secret Orphan.

The Orphan Thief is published in paperback today by One More Chapter and is also available on EBook and Audiobook.