Sister of Mine by Laurie Petrou – blog tour 14th June

Today I am delighted to host the blog tour for Laurie Petrou’s debut novel, Sister of Mine.

TWO SISTERS.  ONE FIRE. A SECRET THAT WON’T BURN OUT.

The Grayson sisters are trouble.  Everyone in their small town. knows it.  But no-one can know of the secret that binds them together.  Hattie is the light.  Penny is the darkness.  Together they have balance.

But one night the balance is toppled.  A match struck.  A fire is started.  A cruel husband is killed. The potential for a new life flickers in the fire’s embers but resentment, guilt and jealousy suffocate like smoke.

Their lives have been engulfed in flames – will they ever be able to put them out?

Stepped in intrigue and suspense, Sister of Mine  is a powerhouse debut; a sharp, disquieting thriller written in stunning, elegant prose with a devastating twist.  And of Liane Moriarty’s Big Little Lies  and Shari Lapena’s The Couple Next Door will be utterly absorbed by this compulsive novel.

Well this is certainly an engrossing read and a gripping debut from Laurie Petrou who sets the scene with unwavering tension that continues throughout the entire novel.  You are constantly just waiting for the truth to be spilled, for some further tragedy to occur and everything to come tumbling down.  Our narrator is Penny, abused by her husband and one day she snaps and he dies in a fire.  She shares her secret with younger sister Hattie and it’s only through the course of the novel that we find out what really happened that night.  Their secret begins to eat a whole in their quiet life. Of course secrets always have a way of being found out and this one might just tear them apart.

To be honest I can’t say I liked either sister very much but I was compelled to follow their story, I knew there was more to the fire that killed Buddy, the abusive husband, and of course there was.  The relationship between the sisters is intense, toxic and seems to burn all those who come within reach.  Sister of Mine is a well written debut that has a sense of menace running throughout, an eerie tension that pulls you into the story right until the very end.

Thanks so much to Anne Cater for inviting me to be a part of this blog tour.

Sister of Mine is published by No Exit Press.

LAURIE PETROU has a PhD in Communication and Culture, and is an Associate
Professor at Ryerson’s RTA School of Media in Toronto, where she is also the Director
of the Masters of Media Production program. She has given several TEDx talks on
subjects including gender and rejection. Laurie was the inaugural winner of the Half
the World Global Literati Award in 2016, a prize that honours unpublished work
featuring female protagonists, for her novel Sister of Mine. She now lives in a small
town in Ontario wine country with her husband, a wine maker, and their two sons. 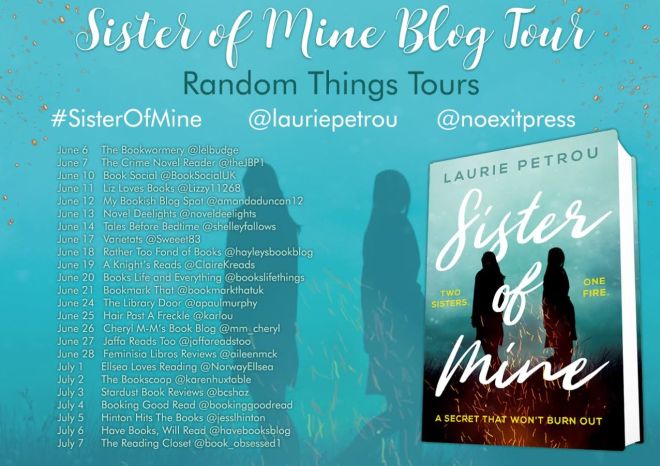