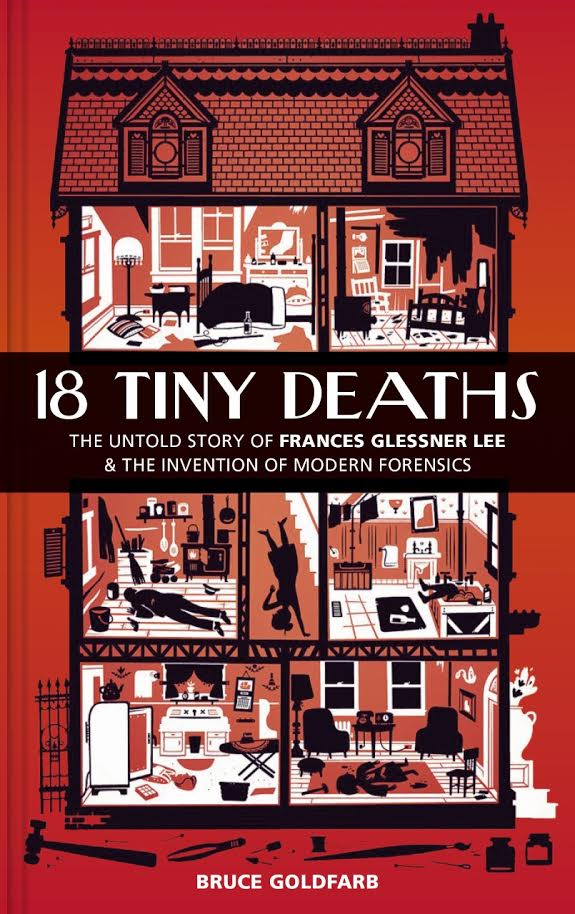 Today I’m delighted to be hosting the blog tour for the 18 Tiny Deaths: The Untold Story of Frances Glessner lee & The Invention of Modern Forensics by Bruce Goldfarb.

18 Tiny Deaths is the remarkable story of how one woman changed the face of muder investigation forever.

Born in 1878, Frances Glessner Lee’s world was set to be confined to the domestic sphere. She was never expected to have a career, let alone one steeped in death and depravity. Yet she was to become known as ‘the mother of forensic science’.

This is her story.

Frances Glessner Lee’s misson was simple: she wanted to train detectives to ‘convict the guilty, clear the innocent and find the truth in a nutshell’. This was a time of widespread corruption, amateur sleuthing and bungled cases. With the help of her friend, the pioneering medical examiner George Magrath, Frances set out to revolutionise police investigation.

Her relentless pursuit of justice led her to create ‘The Nutshell Studies of Unexplained Death’. a series of dollhouse-sized crime scene dioramas depicting actual cases in exquisitely minute detail that Lee used to teach homicide investigators.

They were first used in homicide seminars at Harvard Medical School in the 1930s, and then became a part of the longest running and still the highest regarded police training seminar in America.

Celebrated the world over by scientists, artists and miniaturists, these macabre scenes helped to establish her legendary reputation as ‘the mother of modern forensics’, influencing people the world over, including Scotland Yard.

Frances wanted justice for all. She became instrumental in elevating murder investigation to a scientific dicipline.

18 Tiny Deaths transports the reader vack in time and tells the story of how one woman changed the face of homicide investigation forever.

142 years ago on March 25th 1878, Frances Glessner Lee was born. Frances was born into a life of privilage within a loving family but she wanted more than was expected or encouraged for a young lady of the time. Yet despite her gender preventing her from studying at Harvard she was determined to make her mark there. Eventually she would bring about the opportunity through her own independent financial means, and of course her sheer determination and drive.

For many years I have hoped that I might do something in my lifetime that should be of signifcant value to the community. I was sincerely glad to find that my opportunity to serve lay here at Harvard Medical School. You are possibly all familiar with the objective in mind. My wish is to build up here a department of legal medicine second to none other…

Oh yes, Frances was able to make her mark at Harvard and indeed within the world of legal medicine or as we know it, modern forensics.

I have always enjoyed crime stories. Generally fiction, but all stories are bred from a combination of real life and imagination. When I was younger I would become equally fascinated and horrified at the imagination of Patricia Cornwell and her Dr Kay Scarpetta series of novels. I adore Agatha Christie and other crime writers who leave a trail of clues to follow, some stories proving more gruesome than others but always the culprite would be discovered and held accountabel for their actions. Of course today there are many ways to gather evidence, even years after a crime has been commiteed but imagine a time when there was barely any procedure in place. In fact those who gave cause to a death were not even medically trained at all. When I think of it, there is real horror in all those deaths that may have been wrongly recorded and many murderers who have no doubt walked away free from their crime.

Frances Glessner Lee was a name unknown to me until I was invited to take part in this blog tour. I was abolutely fascinated by the synopsis and so immediately said yes and I’m so glad I did, it is such a fascinating read. Painstaking research into Frances, from early to late life, brings a full insight into this extraordiary, determined woman. Strong, independent, with a sharp intellect, Frances changed the world of medical forensics and is still inspiring to this very day. Although not a doctor herself, or even medically trained, she worked with and learnt from the best, such as her friend George Magrath. She saw his brilliance at investigating cause of death and he showed her the beauty of the human body and the vital information it can provide after death has occured. She championed him both in his efforts to pass his knowledge on to others but she also curated and funded the George Magrath Library of Legal Medicine at Harvard so that others could benefit from his lifeswork. Together they laid the foundations for training future generations of investigators to ‘relentlessly pursue the facts to determine the truth and follow the evidence wherever it leads.’

Bruce Goldfarb has done a wonderful job of bringing Frances’ story to us. I feel it will be a fascinating read for crime lovers, those who work in the field, and also lovers of historical biography. The writing is full of life and vigour. Frances was an incredibly talented woman who made the best of her circumstances to bring about the changes she thought needed. A homemade gift to her mother of a miniture replicure of her mother’s favourite orchestra, showing ninety musicians in formal clothing, with their instruments, sowed a seed that would enable her to teach future homicide investigators to find vital clues required to bring the perpetrator to justice. I for one will never look at a dolls house in quite the same light again.

Thanks so much to Anne Cater for inviting me to be a part of this blog tour and to the lovely people at Octopus Books for sending me a review copy.

Websites of interest for further reading:

Bruce began his career as a paramedic before becoming an award-winning journalist reporting on medicine, science and health. Through his work with the Nutshell Studies, Bruce earned the trust of Fraces Glessner Lee’s family and caretakers of her estate, and was designated Lee’s official biographer.