A Dark Matter by Doug Johnstone

Today I am delighted to be host to the Random Things Tour for A Dark Matter by Doug Johnstone.

After an unexpected death, three generations of women take over the family funeral-home and PI businesses in the first book of a brilliant, page-turning and darkly funny new series

The Skelfs are a well-known Edinburgh family, proprietors of a long-established funeral-home business, and private investigators. When patriarch Jim dies, it’s left to his wife Dorothy, daughter Jenny and granddaughter Hannah to take charge of both businesses, kicking off an unexpected series of events.

Dorothy discovers mysterious payments to another women, suggesting that Jim wasn’t the husband she thought he was. Hannah’s best friend Mel has vanished from university, and the simple adultery case that Jenny takes on leads to something stranger and far darker than any of them could have imagined.

As the women struggle to come to terms with their grief, and the demands of the business threaten to overwhelm them, secrets from the past emerge, which change everything…

It’s a compelling and tense thriller and a darkly funny, warm portrait of a family in turmoil. 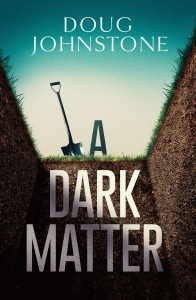 Oh my, this is one unique, wonderful and engrossing read. I haven’t read Doug Johnstone before and I didn’t know what to expect of A Dark Matter but I felt intrigued by the synopsis, plus it is published by Orenda Books and so of course it was always going to be something special. And special it is. Boy does Doug write women brilliantly…and plot, dark humour and mystery. It’s all rather brilliant to be honest. Right from the beginning I was gripped by the characters, storyline and writing. He has absolutely nailed it. The females take centre stage and each one of them is troubled in their own way but oh their strength, courage and fiery determination!

Jim was the heart of their world, the centre point, and so his unexpected death is a blow to them all. Their lives have always been surrounded by death; dealing with the aftermath, the shell of a precious loved-one and helping the grieving families move on. Jim’s last wish is to keep the matter as simple as possible afte his demise, but things are never quite that simple and as the dust of his (rather unorthodox) cremation begins to settle the secrets begin to surface.

Dorothy, Jenny and Hannah, the three women he has left behind – wife, daughter and granddaughter – pull together to keep the family business going. After 50 years together Dorothy feels his loss keenly, like a piece of her very soul is missing but her devotion is tested when she discovers mysterious payments that Jim has been making over the last 10 years from the business account. What was he hiding? And was he really the man she thought he was?

Death stops for no one and so there is no time to sit back and grieve. Alongside the funeral-home, the private investigation side of the business cares little that death has taken the investigator as life continues to throw up sordid secrets. A missing girl, an untrustworthy carer and a cheating husband, alongside their own personal mystery about the man they thought they knew, throw these women into a world were things are often not as they seem and somewhere the darkest secret of them all is waiting to be unearthed.

In his acknowledgements, Doug mentions his time as writer in residence at William Purves Funeral Directors from which the novel is partly inspired. I have never heard of a writer in residence at a Funeral Directors before, but it just goes to show that inspiration can come from the most unlikeliest sources. It is an area of life that most of us, I would guess, prefer not to think about to much. I myself am a little unnerved by it but I found this novel so enjoyable and Doug handles the subject brilliantly, bringing life and humour to it.

This is an outstanding novel; quirky, complex, with humour and real heart – I absolutely loved it. I believe this may be the start of a series? Oh I really do hope so. Thoroughly recommended.

Thank you so much to Anne Cater for inviting me to take part in this blog tour and to the wonderful team at Orenda Books for sending me a copy. Post from you is always as happy day.

A Dark Matter is published by Orenda Books and will be available in paperback (January 23rd), EBook (available now) and audiobook (coming soon). 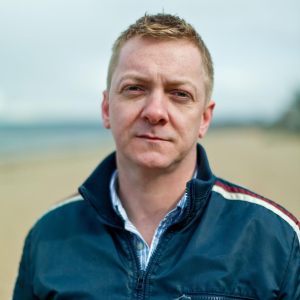 Doug Johnstone is the author of ten novels, most recently Breakers (2018), which has been shortlisted for the McIlvanney Prize for Scottish Crime Novel of the Year. Several of his books have been bestsellers and award winners, and his work has been praised by the likes of Val McDermid, Irvine Welsh and Ian Rankin. He’s taught creative writing and been writer in residence at various institutions – including a funeral home – and has been an arts journalist for twenty years. Doug is a songwriter and musician with five albums and three EPs released, and he plays drums for the Fun Lovin’ Crime Writers, a band of crime writers. He’s also player- manager of the Scotland Writers Football Club. He lives in Edinburgh.