Today is my final blog tour for 2019 and so close to Christmas I am certainly ending on an absolute cracker as I play host to Gone by Leona Deakin.

Left at their last-known locations are birthday cards that read:

YOUR GIFT IS THE GAME
DARE TO PLAY?

The police aren’t worried – it’s just a game. But the families are frantic, and psychologist and private detective Dr Augusta Bloom is persuaded to investigate. As she delves into the lives of the missing people, she finds something that binds them all.
And that something makes them very dangerous indeed.

As more disappearances are reported and new birthday cards uncovered, Dr Bloom races to unravel the mystery and find the puppeteer. But is she playing into their hands?

– what if the missing people are the dangerous ones? 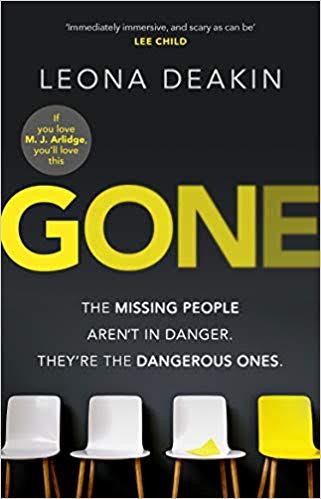 This was a very, very enjoyable read.  I have to say I am mightily impressed that this is a debut and rather excited that it kicks of the start of a series.

Right from the very first page this novel had a grip on me and I honestly found it hard to put down.  Daily life became frustrating as I was constantly on the lookout for my next opportunity to read, even waking up extra early to read.  The structure and plotting is superb and the twists and turns of the story executed with a expert hand.

The story begins with a crime scene.  A victim lies on the floor, life slowly ebbing away.  With him are two school girls.  At this stage we’re unsure what happened but the event leaves us with a feeling of unease. Something isn’t quite right and one of the young girls is sent to see Dr Bloom.  Alongside this runs what appears to be the main plotline of the disappearance of a young mother. Lana disappears without a trace on her birthday.  The only clue that remains is an unsigned birthday card simply stating ‘YOUR GIFT IS THE GAME.  DARE TO PLAY’.  As Dr Augustus Bloom and her partner Marcus Jameson begin to investigate it becomes clear that there are more disappearances and that the danger doesn’t lie with the missing people but is closer to home.

Exciting, fast-paced and with an very engaging detective team this is definitely a series to watch.  I can’t wait to read more. There are also reading group questions at the back and a sneak peek at book 2.  Thankfully the second novel is not too far away, with Lost due to be published in 2020. 🙂

Many thanks to Anne Cater of Random Things Tours for inviting me to take part in this blog tour.

Leona draws inspiration for her writing from her own experiences having started her career as a psychologist with the West Yorkshire Police and her successful work in psychology since. She is now an occupational psychologist and lives with her family in Leeds.  Gone is her debut thriller. 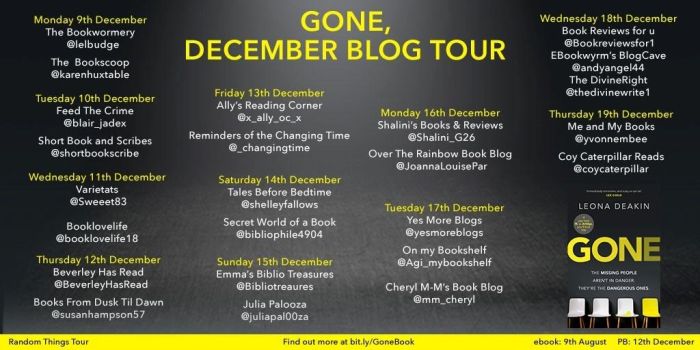