Today I’m delighted to be hosting the blog tour for Blind Witness by Vicki Goldie, the first novel in The Charters’ Mysteries Series.

In 1922 a blind WWI veteran and former intelligence officer attends a weekend with his aristocratic wife and her family at a country house in the New Forest, Hampshire. Fourteen people sit down to dinner on the Friday night; by the end of the weekend there are tow murders, an attempted murder and a suicide.

This is book one in a series of humorous murder mysteries and introduces young sleuths The Hon Melissa Charters and her war veteran husband Major Alasdair Charters.

The pair collaborate using Melissa’s powers of observation and Alasdair’s old skills gained in the Secret Intelligence Service to investigate the events unfolding over the weekend. A murder mystery, with a spy plot told from many different points of view in the tradition of Simon Brett, M.C. Beaton and Kerry Greenwood.

Major Alasdair Charters returned from the First World War without his sight. What happened the night he sustained his injury is unknown but there is something about it that still doesn’t sit well with him. Relieved to be alive and yet feeling much less of a man, he has struggled to come to terms with being looked after by his young, long suffering wife, Melissa Charters. He wonders why she is still with him and fears it may be more duty and pity than love. Melissa, however, adores her husband and wants nothing more than to remain by his side. If only she could lift his war battered spirit. After much patience on her part, he finally relents and agrees to escape the safety of their London flat and accepts a weekend visit to her family house in the country. A house that has also seen it’s own loss during the war. Melissa’s family have been summoned by her uncle, Brigadier Ferguson and his wife, Lady Honor. At first it seems like an innocent reunion but before the first night is over a murder has been committed and everyone in the house is a suspect. Could there be evil lurking within the family or could the small number of other guests, strangely invited considering it is a family gathering, have something to do with it? Desperate to discover the killer and prevent further crimes Alasdair shakes off his sense of uselessness and with Melissa by his side the two delve deeper into family and war time secrets – secrets that someone will resort to anything to keep quiet. Alasdair may be blind but his mind (and hearing) is still sharp as a tack and with Melissa as his eyes the pair may just get to the bottom of the mystery.

I am a big fan of crime novels and in particular the style of Agatha Christie, the original Queen of the murder mystery. She was of course a master creator of character and could find evil in the most mundane of situations, creating a thrilling read along the way. Her novel always entertain and thrill/  Blind Witness provided me with a welcome return to this gentle, yet intriguing style of crime novel and an interesting debut. I found the central characters interesting and I feel there is still a great deal to be seen from them. This is an engaging read and I feel that it shows a promising start to the series. I hope that we discover more about Major Charters and his wife. They make a good team and I look forward to revisiting them again in the second novel of the series.

Many thanks to Anne Cater for inviting me to be a part of the blog tour and to Vicki Goldie for gifting me a copy in exchange for an honest review. I wish you all the very best with the series.

Vicki worked as a Chartered Librarian for the Royal National Institute of Blind People and then for the past 19 years in public libraries in Bournemouth and Poole. There she enjoyed arranging and attending writing courses and author events, including such luminaries as Fay Weldon and Peter James. With the Reading Agency and other librarians round the country she reviewed and selected books for The Radio Two Book Club. All the time writing away in her spare time.

Born in California but brought up in England she was introduced to the Golden Age of crime authors at an early age by her mother. She is married to a blind physiotherapist, and it is from his mother, born in a large country house in Devon (now a hotel), educated by governess and with a cut glass voice like the Queen, that she absorbed real life stories about the twenties and thirties.

She has always had a fascination with the Art Deco period and the Golden Age of crime writing. She has been filling her house with Art Deco inspired artefacts and clothing for 40 years.

Blind Witness is her debut novel and is the beginning of the Charters Mysteries Series featuring Major Alasdair Charters and The Honourable Melissa Charters. 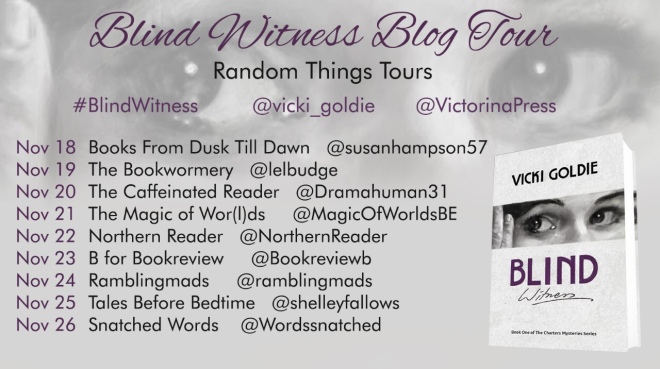