The Toll by Neal Shusterman

So publication day is FINALLY here and the third and final novel in the Arc of a Scythe series. First we had Scythe, then Thunder Head, and now The Toll.

Synopsis for The Toll

I DO NOT SPEAK WITH THE VOICE OF THE THUNDER.

BUT THE THUNDER DOES SPEAK THROUGH ME.

The explosive conclusion to the New York Times bestselling Arc of a Scythe series!

It’s been three years since Rowan and Citra disappeared; since Scythe Goddard came into power; since the Thunderhead closed itself off to everyone but Grayson Tolliver, and it’s time for things to change. In this pulse-pounding finale to Neal Shusterman’s internationally bestselling trilogy, constitutions are tested and old friends are brought back from the dead.

The Arc of Scythe is set in a dystopian world where humanity has discovered all it can, including how to avoid death.  But in a world where nobody dies, population has to be controlled. Scythes choose who, when and how people are “gleaned” and the Thunderhead presides over all other political and economic issues; will AI bring about the world’s end or could humanity be their own destruction. 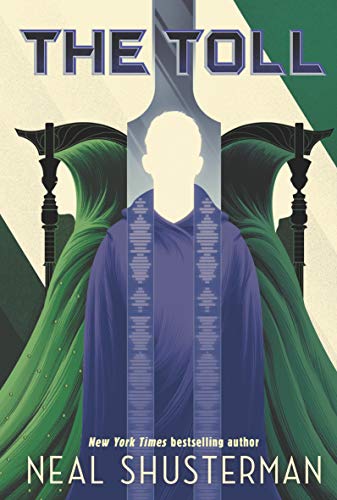 This has been the most amazing set of books!  Neal Shusterman has created a breath-taking dystopian series that makes you explore humanity and it’s freedom. Will we ultimately be our own destruction with the AI that we create?

Imagine a world where nobody dies? Where we can never get old by simply resetting and going on and on. Of course the population still needs to be controlled. Scythes have the power to decide who, when and how people are ‘gleaned’.  They are distinctive by their often ornate robes and are never a welcome visitor. But overseeing all political and economic issues is the Thunderhead, an ominous ‘cloud’ ultimately controlling humanity.

I can’t recommend this series highly enough. Both myself and my students have been awaiting this final installment and I can tell you it doesn’t disappoint. Oh. My. God. I couldn’t read this fast enough. It is such an exciting, rollercoaster of a read. I’m tempted to start all over again…now where’s my copy of Scythe?

If you haven’t discovered the Arc of a Scythe then I urge you to start at the beginning…you lucky things.

So…who would my Patron Historic be?

Who do I find an inspiration? Well I think it would have to be Mary Wollstonecraft.

Mary Wollstonecraft was an English writer who lived from April 1759 until September 1797. She was one of the very first feminists and a passionate advocate of educational and social equality for women. She was earning her own money through her writing at  a time when it was unheard of for women to be financially independent. She had a short and somewhat tragic life but she helped to lay the foundations for feminism and equality. She died 11 days after giving birth to Mary Wollstonecraft Shelley, the author who gave us Frankenstein.

And what would my robes be?

Well, they would be of the deepest purple made from the softest eco-friendly bamboo (we’d be doing even more to save the world of we were likely to be spending more time on it!) with silver trim. They would be decorated in shimmery silver words of wisdom that from a distance would look like thousands of sparkly stars.

Thank you so much to the fabulous people at Walker Books for inviting me to review this amazing series. Go get it today. It’s perfect for teens, YAs and adults.

Neal Shusterman is an award-winning author whose books include the Arc of a Scythe series (Scythe, Thunderhead and The Toll), the New York Times bestselling Unwind series and Challenger Deep, which won a National Book Award. He also writes screenplays for film and television, for shows such as Goosebumps and Animorphs. He lives in Southern California, USA.

Repost from @lingfieldseniorschoollibrary
Spending time with nature is good for your mental well-being - FACT. Listen to those birds! #mentalhealthawareness #walktowork
Today on #talesbeforebedtime I chat about the amazing #wegoonforever by @sarahgovett @marottebooks A superb piece of #dystopian #fiction for both adult and YA readers. Visit the blog for more details. Link in bio. ❤️😊
Repost from @sarahgovett
Maddy full of chat.
This morning’s commute. ❤️ #walktowork