Today marks the end of a uniquely special month of blog tours celebrating the publication of the IWM Wartime Classics collection and I’m thrilled to be taking part to chat about this amazing collection and especially, Eight Hours From England by Anthony Quayle.

How do people cope with the experience of being at war? Those on enemy soil and those at home? For many it was a period left unspoken, the memories too difficult to share. Then there are others who found another creative outlet to release those memories. Surely sometimes talking about such difficult experiences may be easier when giving them to a fictional character. These four books from the Wartime classics collection show us just what can be created when stories are written from personal experience. These authentic, engrossing reads give you a unique insight into life at this time. There is something very personal about the stories and as I read them I feel that each author has captured the reality of the Second World War brilliantly.

Perfect for lovers of historical fiction but also scholars and students who may be trying to make sense of how the world was through the eyes of those who really lived it.

Autumn 1943. Realising that his feeling for his sweetheart are not reciprocated, Major John Overton accepts a posting behind enemy lines in Nazi-Occupied Albania. Arriving to find the situation in disarray, he attempts to overcome geographical challenges and political intrigues to set up a new camp in the mountains overlooking the Adriatic.

As he struggles to complete his mission amidst a chaotic backdrop, Overton is left to ruminate on loyalty, comradeship and his own future.

Based on Anthony Quayle’s own wartime experience with the Special Operations Executive (SOE), this new edition of a 1945 classic includes a contextual introduction from IWM which sheds new light on the fascinating true events that inspired its author.

I remember lazy Sunday afternoons as a child.  Sunday roast and family time falling asleep in front of the TV watching a Bond or old war movie.  No doubt The Guns of Navarone would have been one such film but I don’t really recall.  As a young child I would have just thought of it as a piece of fiction,  I certainly wouldn’t have thought that the actors involved had actually served in the war.  Of course there was every possibility. In fact as I’ve grown older and learnt so much more about that time and the films and books that was born from it I realise that a great many of the actors probably drew on personal experience when acting.  Anthony Quayle was one such actor.

This novel, according to Alan Jeffreys in the introduction, was so well received when it was originally published back in 1945 that the author did consider turning from his acting career and becoming a writer.  He decided that he didn’t have enough experience for further endeavour and so continued with his wonderful acting career, which was I’m sure to great relief of the acting world.  He was incredibly well respected and within this novel we can see that his talents extended to the written word.  As with the other three novels in this collection, Eight Hours From England gives us a close up and personal view of the Second World War.  This time we are travelling to Nazi-Occupied Albania and the life as part of the SOE.

The introduction as with the previous titles is informative and enticing.  Alan Jeffreys informs us that this novel is so close to Anthony’s own experience that it’s almost a memoir.  This novel, just like the others, have given me an even greater insight into this time in history.  Yet it’s also an excellent novel, a thrilling read and one that will stay with you long after you have turned the final page.

This is an absolutely brilliant series. I have thoroughly enjoyed being part of these blog tours. I am so grateful for the IWM for bringing these stories back into print for a new generation to enjoy and to make sure they are not forgotten. I have purchased the entire series for my school library for both staff and older students to enjoy and my personal copies will remain firmly amongst my own collection.

Thank you to Anne Cater for inviting me to take part in these tours and also to the Imperial War Museum for my review copies.

This is information taken from Eight Hours From England.

Anthony Quayle (1913-1989) was a successful British actor and theatre director, well known for his roles in classic plays on the stage as well as his film career. After appearing in music hall he joined the Old Vic in 1932, touring in various productions before the outbreak of the Second World War.

During the war Quayle served in the Royal Artillery, and later joined the Special Operations Executive (SOE), whence he was deployed to Albania, Eight Hours from England, is a fictionalised account of Quayle’s time behind enemy lines there. He also wrote a later novel, On Such a Night, about his time with the British Army in Gibraltar.

After the war Quayle returned to the stage. From 1948 to 1956 he was the director of the Shakespeare Memorial Theatre, laying the foundations for the creation of the Royal Shakespeare Company and helping to establish Stratford-on-Avon as a major centre of British theatre.

Quayle’s screen career began on 1938 and he appeared in many classic films such as Ice Cold in Alex (1958), The Guns of Navarone (1961), and Lawrence of Arabia (1962). Quayle received both Academy Award and Golden Globe nominations for his role in Anne of the Thousand Days (1969), and his towering stage career took him around the world to both popular and critical acclaim. He was knighted in 1985.

IWM (Imperial War Museums) tells the story of people who have lived, fought and died in conflicts involving Britain and the Commonwealth since the First World War.

Our unique collections, made up of the everyday and the exceptional, reveal stories of people, places, ideas and events. Using these, we tell vivid personal stories and create powerful physical experiences across our five museums that reflect the realities of war as both a destructive and creative force. We challenge people to look at conflict from different perspectives, enriching their understanding of the causes, course and consequences of war and its impact on people’s lives.

Want to find out more about the books in this series?  Check out my other articles for Plenty Under the Counter and Trial by Battle 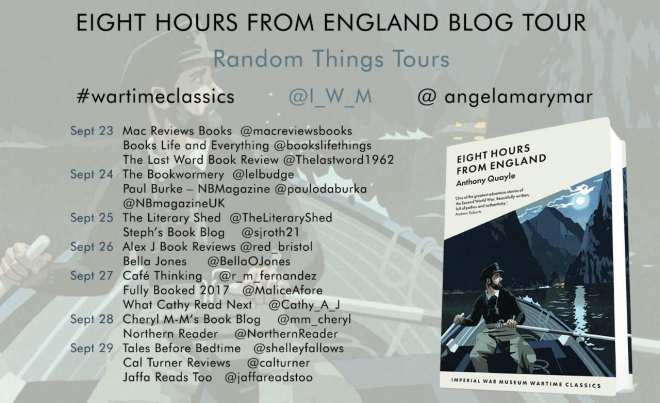