Today I’m delighted to be taking part in the blog tour for Love, Unscripted by Owen Nicholls and even better than that it publishes TODAY!

Owen Nicholls’ Love, Unscripted is an uplifting love story, following film projectionist
Nick as he tries to understand the difference between love on the silver screen and love
in real life. Perfect for fans of David Nicholls, Nick Hornby and Laura Barnett.

For Nick, love should look like it does on the big screen. And when he meets Ellie on the
eve of the 2008 presidential election, it finally does. For four blissful years, Nick loved Ellie as much as he loved his job as a film projectionist in his local cinema. Life seemed picture-
perfect. But now it’s 2012, Ellie has moved out and Nick’s trying to figure out where it all went wrong.

With Ellie gone and his life falling part, Nick wonders if their romance could ever be as perfect as the night they met.

Can love really be as it is in the movies?

Oh but this novel is a complete joy to read. A delicious love story that has sufficient angst and ‘will they won’t they’ moments that swept me away. As a film lover I adored the references scattered throughout and I loved the sections featuring Nick’s job as a film projectionist, especially at a time that covered the inevitable move from 35mm to digital. This novel is not only about Nick’s love for Ellie and his journey of discovery as to where it all went wrong but also a nod to historical changes happening in the world at this time (beginning with Obama becoming President of the United States). Can such changes mean an inevitable death or simply a chance for new beginnings?

Ellie and Nick are quite obviously made for each other but as we join there story she has moved out. The beginning if the end. We have Nick’s viewpoint on things and so often events aren’t quite as they seem but gradually he comes to realise what actually went wrong and where the fault lies. Relationships are never straightforward and Nick does at times seem hellbent on self destruction and had me shouting at the book ‘You Idiot!’ on more than one occasion. I have to say that it was only because I am a total believer in true love and I so wanted these too characters work it out and fall back into each other’s lives. Owen’s writing is a joy to read. His plot was faultless, funny and moving. My favourite moment is a toss up between the visit to the Cannes Film Festival or the bathroom window incident – both made me laugh out loud. I can so see this being adapted into a screenplay or film. Love, Unscripted is deserving of a permanent place on my bookshelf for a reread on many occasions and I wholeheartedly recommend inviting this wonderfully uplifting read into your lives.

Thank you so much to Anne Cater for inviting me to take part in this blog tour and to the lovely people at Headline Review for sending me a copy. It was an absolute joy.

Owen Nicholls is a screenwriter with a Masters in Scriptwriting from the UEA. His work has appeared in Empire and NME, and earlier this year Love, Unscripted was selected for the Escalator Scheme run by Writers’ Centre in Norwich.

Love, Unscripted is published in hardback on August the 22nd by Headline Review.

It is also available on eBook and Audiobook.  the paperback is scheduled for publication in February 2020 but believe me you don’t want to have to wait until then to read this. 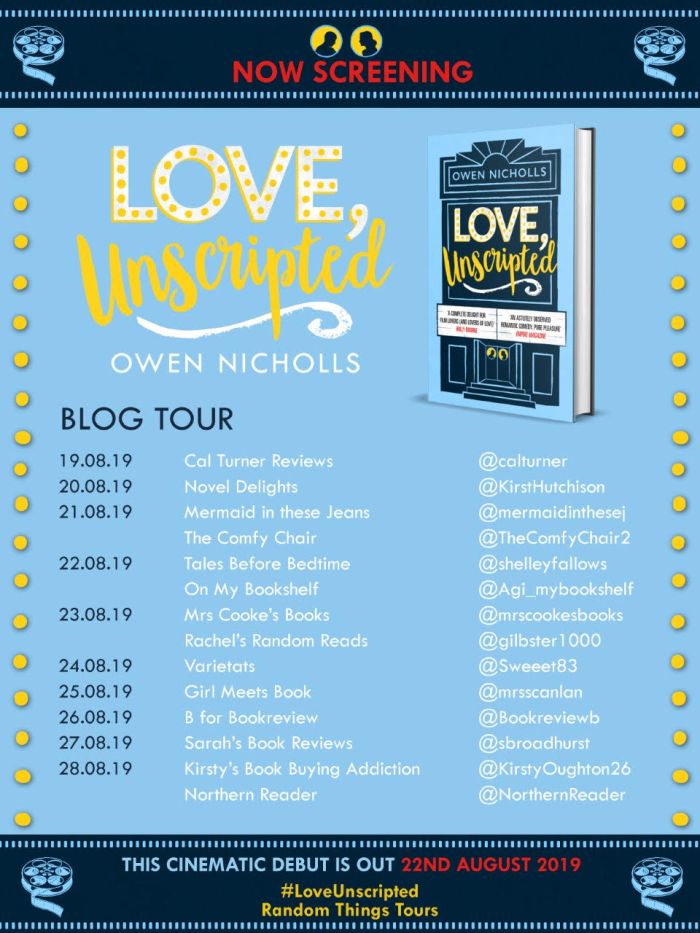