Books to be swept away with this summer…

There are SO MANY great books around at the moment and so I’d like to share a few that I think are particularly exciting.  I’m not going to plop them all together in one post but give each the opportunity to shine in it’s own right…

Hold on to your hats… here are my summer 2019 recommendations.

I’m doing three books in one this time!  Because once you’ve read the first you won’t be able to stop… and why on earth would you!

One body. Six stories. Which one is true?

1997. Scarclaw Fell. The body of teenager Tom Jeffries is found at an outward bound centre. Verdict? Misadventure. But not everyone is convinced. And the truth of what happened in the beautiful but eerie fell is locked in the memories of the tight-knit group of friends who embarked on that fateful trip, and the flimsy testimony of those living nearby.

2017. Enter elusive investigative journalist Scott King, whose podcast examinations of complicated cases have rivalled the success of Serial, with his concealed identity making him a cult internet figure. In a series of six interviews, King attempts to work out how the dynamics of a group of idle teenagers conspired with the sinister legends surrounding the fell to result in Jeffries’ mysterious death. And who’s to blame…

As every interview unveils a new revelation, you’ll be forced to work out for yourself how Tom Jeffries died, and who is telling the truth.

A chilling, unpredictable and startling thriller, Six Stories is also a classic murder mystery with a modern twist, and a devastating ending.

Which one is true?

One cold November night in 2014, in a small town in the north west of England, 21-year-old Arla Macleod bludgeoned her mother, father and younger sister to death with a hammer, in an unprovoked attack known as the Macleod Massacre. Now incarcerated at a medium-security mental-health institution, Arla will speak to no one but Scott King, an investigative journalist, whose Six Stories podcasts have become an internet sensation.

As King unpicks the stories, he finds himself thrust into a world of deadly forbidden ‘games’, online trolls, and the mysterious black-eyed kids, whose presence seems to extend far beyond the delusions of a murderess…

Dark, chilling and gripping, Hydra is both a classic murder mystery and an up-to-the-minute, startling thriller, that shines light in places you may never, ever want to see again. 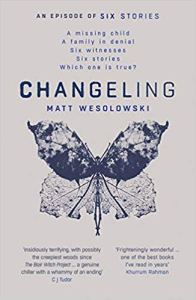 On Christmas Eve in 1988, seven-year-old Alfie Marsden vanished in the Wentshire Forest Pass, when a burst tyre forced his father, Sorrel, to stop the car. Leaving the car to summon the emergency services, Sorrel returned to find his son gone. No trace of the child, nor his remains, have ever been found. Alfie Marsden was declared officially dead in 1995.

Elusive online journalist, Scott King, whose ‘Six Stories’ podcasts have become an internet sensation, investigates the disappearance, interviewing six witnesses, including Sorrel, his son and his ex-partner, to try to find out what really happened that fateful night. He takes a journey through the trees of the Wentshire Forest a place synonymous with strange sightings, and tales of hidden folk who dwell there. He talks to a company that tried and failed to build a development in the forest, and a psychic who claims to know where Alfie is…

Intensely dark, deeply chilling and searingly thought provoking, Changeling is an up-to-the-minute, startling thriller, taking you to places you will never, ever forget.

All three books have been published in hardback by Orenda Books and you can find where to buy it here (also your local indie will be able to get hold of them too if they don’t already have a copy.). All three are also available on both Audio and eBook.

Read them already?  Please feel free to let us know what you think by leaving a comment below.

Happy reading and I hope you have a fabulous summer!