The Seventh Train By Jackie Carreira

Today I am thrilled to be taking part in the blog tour for The Seventh Train by Jackie Carreira. This is a wonderfully touching and unique novel that I heartily recommend. It will forever change the way I look at trains and their passengers. Jackie proves that they are the perfect stage to find the fascinating, raw stories being carried out both around and within us.

Moving from stage to page, The Seventh Train has taken the scenic route from Jackie Carreira’s award-winning play to a second novel that promises to be as well-received as the first (Sleeping Through War, 9781788038539) The Seventh Train is a ride – a ‘road movie’ on the railways. It’s a journey that Elizabeth invented; the only original thought she has ever had in her previously uneventful life. Unbeknown to her, she is not travelling alone. If only she’d pretended that the spare seat was taken.

Although, by turns, hilarious and life-affirming, part of the story tackles serious issues of suicide and mental health, specifically the alarmingly high incidents on public transport. As Jackie says: “This is something that’s been in the news a lot recently, especially as suicide rates on the UK rail system increased by 9.1% last year. It’s a hugely important issue. Having said that, it’s not a gloomy novel at all, but actually full of hope and a good dose of wit!”

It’s a project that has been part of Jackie’s life for years. Originally conceived as a stage play, it was her theatrical debut and went on to become one of the winners of The Kenneth Branagh 10th Anniversary Award for New Drama at the Windsor Fringe Festival. From there, it just kept chugging along until it became the novel Jackie is releasing now.

With a wonderfully eclectic cast of characters, The Seventh Train takes its
passengers on a journey from the tragic to the strange, arriving finally at hope.

By turns heart-breaking, thought-provoking and hilarious, this tale is a life-affirming exploration of the human spirit via the British railway timetable! 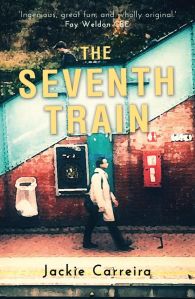 I was intrigued by the idea of this novel. Not only has it been on quite a journey of it’s own but the premise of a ‘road movie on the railways’, a woman travelling alone and the eclectic mix of characters she meets along the way was enticing. There is an undercurrent of depression constantly beneath the surface. That sense that we are completely and utterly alone in our despair (or numbness) touched upon in a unique way as our protagonist Elizabeth believes that she is the only traveler on this particular journey.

This isn’t a dark novel though, far from it.  There is a wonderful lightness of touch with the writing. Suicide and depression are heavy subjects to convey and yet in a way The Seventh Train not about these things but surviving them. We meet Elizabeth at a low point in her life, she feels numb and doesn’t really know what she wants or where she wants to be. She just knows she wants to be anywhere but here. So begins a journey of ‘the seventh train’. In her own strange way this journey is her escape. She is in control but also not having to decide where to go. As I said, she doesn’t know where to go but simply wants to be anywhere but ‘here’.  There is something about Elizabeth that I found vaguely familiar. That sense of disappointment in life, of wanting to disappear and yet also wanting to be found. She is compelling company.

The Seventh Train began it’s journey as a short stage play with only two characters. It quickly travelled on eventually becoming a novel and, as Jackie states in the introduction, ‘picking up new passengers along the way’. The passengers of course are the story.  Her characterisation is wonderful and she brings each one of this strange mix of individuals to life through their own voices and stories. Elizabeth craves solitude but no matter how hard she tries to camouflage herself, to disappear amongst the generally detached commuters, someone begins to take notice.

This is an incredibly uplifting, well written novel. I absolutely adored being part of the journey. Suicide is a very difficult subject but Jackie’s skill as a writer gives an edge of hope rather than despair. The story did make me think. Not only about my own life but of those around me. People today generally walk in a bubble most of the time, plugged in to some device and as far removed from each other as is possible. The Seventh Train reminds us that we’re not alone. That each and every one of us is travelling on their own journey but there are always other travellers alongside us, even if we don’t see them at first. Some with eager eyes and hope and others with heads lowered barely caring where they end up. The important thing is that we don’t have to make that journey alone. There is always someone out there to share our story with. We just need to look up long enough to see them.

I do hope the stage version pops up on my own journey before too long. I’d absolutely love to see it. Perhaps even a television adaptation???

Many, many thanks to the fabulous Anne Cater for inviting me to take part in this blog tour.  This is a wonderful novel that I thoroughly enjoyed and I’m so pleased I can now tell people about it and send it further on it’s way.

Jackie Carreira is a writer, musician, designer, co-founder of Quirkhouse Theatre Company, and award-winning playwright. Born in Leicester, she moved to London as a baby and went to school in Hackney, but also spent part of her early childhood in Lisbon’s Old Quarter. Destiny thereby dictated that her formative years were heavily influenced by her working-class upbringing and cities beginning with the letter ‘L’, for some cosmic reason that she has not yet figured out.

Jackie now lives in the English county of Suffolk with her actor husband A J Deane, two cats and too many books. One of her favourite places to write is in railway cafes. The Seventh Train was originally born over several cappuccinos at Paddington station.

The Seventh Train is published by Matador where is can be purchased in paperback or ebook. It can also be ordered via your local indie bookshop or via Amazon.

You can discover more about Jackie via her website here.