Murder At Macbeth by Samantha Goodwin

When a talented, young actress unwittingly stabs herself live onstage after a prop knife is tampered with, suspicion immediately falls on her eclectic band of castmates. But who had the motive to kill the show’s leading lady? As the insightful, yet disillusioned, Detective Inspector Finley Robson and his shrewd partner, Detective Sergeant Nadia Zahra, interrogate the seven key suspects, secrets unfold to unveil a web of scandal, blackmail, and deceit. Bitter rivalries, secret trysts and troubled pasts are just the beginning of the story… 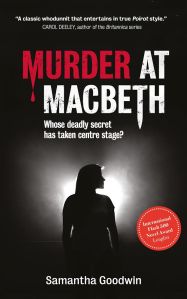 I do read a great deal of crime and thriller novels and so I was delighted to receive a copy of Samantha’s debut to review.

A young leading lady is killed on stage during the opening night of Macbeth, a play already shrouded in ill-fated superstition.  Soon the police are wading through a cast of characters each hiding secrets of their own but which one holds the key to the murder?

This is a good, old fashioned murder mystery.  Clues are drip fed along the way as each suspect is interviewed by the police.  Detective Robson and Detective Sergeant Zahra make a great team and there was an echo of Death in Paradise (without the paradise) to the tale. Flashbacks to events leading up to the night of the murder give us a greater insight into what is going on behind the scenes and each member of the cast could have been the culprit.  The end was a surprise that I didn’t see coming.

An interesting debut and I feel that we will see more from Samantha.

Samantha Goodwin has written professionally for her business career as a Chartered Marketing Manager for over a decade before turning her hand to fiction. As an avid crime fiction fan, she regularly participates in the renowned Theakston Old Peculier Crime Writing Festival in Harrogate and relishes attending literature festivals across the country as well as engaging in numerous online writing communities. Keen to support new and upcoming authors, Samantha recently launched the #IndieWritingWisdom initiative on Instagram to collate and share inspiring, original writing quotes from a wide range of different writers to encourage others. When not writing, Samantha enjoys reading, movies, musicals, countryside walks and almost all chocolate (but controversially not Oreos). She lives in Leeds, England with her husband, Chris, and young son, Jack. Murder at Macbeth is her first novel.

Murder at Macbeth is available in both eBook and paperback from Amazon. 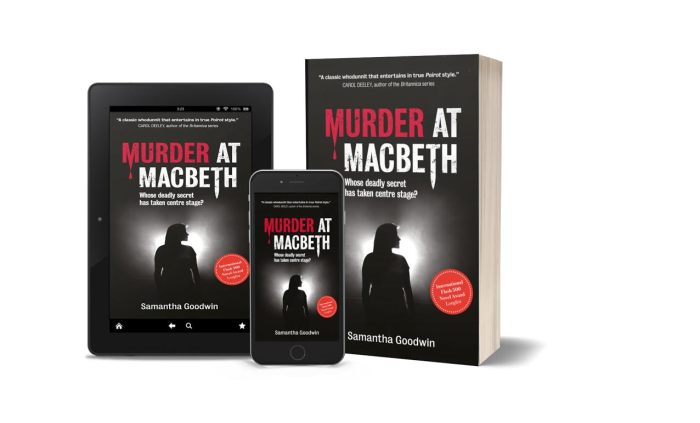 Like Loading...
‹ Take Me to the Edge by Katya Boirand
Tell Me Where You Are by Moira Forsyth ›