In 1850, young Scottish plant hunter John Jeffrey was despatched by an elite group of Victorian subscribers to seek highly prized exotic trees in North America. An early letter home told of a 1,200-mile transcontinental journey by small boat and on foot.  Later, tantalising collections of seeds and plants arrived from British Columbia, Oregon and California, yet early promise soon withered. Four years after setting out, John Jeffrey, and his journals, disappeared without a trace.  Was he lost to love, violence or the Gold Rush? Green Gold combines meticulous research with the fictional narrative of Jeffrey’s lost journals, revealing an extraordinary adventure.

There is something quite exciting about plant hunters. It’s a subject that I have been interested in for some time. I have come across hunters such as Sir Joseph Banks, Sir Joseph Hooker and Ernest Wilson. I’ve admired the botanical paintings and adventurous spirit of Marianne North, her own contribution to the history of plants and their native habitat being incredibly valuable. Yet I had never heard of John Jeffrey.  Therefore this partly fictional/partly historical record is filled with fascinating insight and takes us back to the past and a time when travelling to North America would have been fraught with danger.

Jeffrey’s journals have never been recovered but meticulous research through archives such as those held in the library of the Royal Botanic Garden in Edinburgh has enabled Gabriel to piece together Jeffrey’s journey from the time he left the UK until his disappearance.  Of course we may never know exactly what happened but through this combination of fact and carefully considered fiction we are able to gain an insight into the treacherous journey that John undertook.  The wonders he witnessed, the hardships he suffered and the life changing relationships he forged. It would seem that those who sent him on his journey had little appreciation for what he was to face.  He was very young and although had a good knowledge of his subject could not have been adequately prepared for the world he was thrown into.

Anyone interested in botany and the history of plant hunters will find this a fascinating read.  Gabriel brings the realities of these dangerous expeditions to life and by giving John a voice has brought him and his legacy to light in the twenty-first century.  John Jeffrey collected ‘at least 400 plant specimens and seeds of 199 species‘ during his 10.000-mile expedition route across North America.  These include trees that are now part of the British landscape.  John Jeffrey as well as many other adventurers risked their life to find new and exciting species of plants and it’s wonderful to be able have a glimpse into their worlds through books such as Green Gold.  An unusual style of writing that is refreshing, thought-provoking and made me want to discover more about John Jeffrey.  There is also rather helpfully a further reading list at the back of the book so I look forward to exploring some of the recommendations there.

I’m delighted to have discovered Gabriel and look forward to now reading his first book The New Sylva.

Thank you so much to Anne Cater of Random Things Tours for inviting me to take part in this blog tour.

Gabriel Hemery is a tree-hunter, forest scientist and published author. As a young researcher he led a seed-collecting expedition to the walnut-fruit forests of Kyrgyzstan, and in his career as a hands-on scientist has planted tens of thousands of trees in plantations and experiments across Britain. Gabriel played a lead role alongside other prominent environmentalists in halting the sell-off of England’s public forests. After leading the Botanical Society of the British Isles as its first Director of Development, he co-founded the environmental charity Sylva Foundation, since leading it as Chief Executive. His first book The New Sylva was published to wide acclaim in 2014. He lives near Oxford in England. 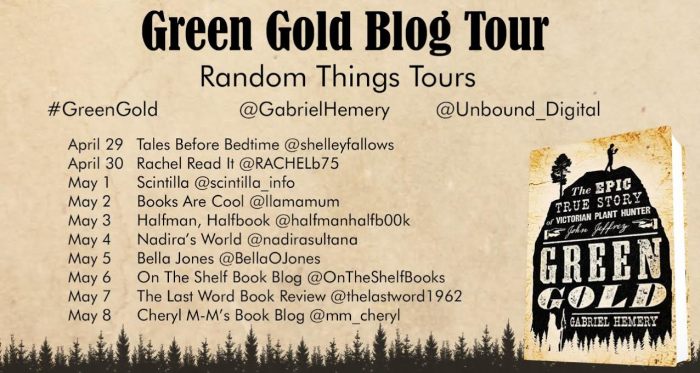 Green Gold is available in eBook and Paperback and is published by Unbound.

Like Loading...
‹ The Garden of Lost and Found by Harriet Evans
We All Fall Down by Daniel Kalla ›

Repost from @lingfieldseniorschoollibrary
Spending time with nature is good for your mental well-being - FACT. Listen to those birds! #mentalhealthawareness #walktowork
Today on #talesbeforebedtime I chat about the amazing #wegoonforever by @sarahgovett @marottebooks A superb piece of #dystopian #fiction for both adult and YA readers. Visit the blog for more details. Link in bio. ❤️😊
Repost from @sarahgovett
Maddy full of chat.
This morning’s commute. ❤️ #walktowork