How do you get in trouble with the moon?

High in the mountains lives a magical creature called: The Pooka.  The Pooka loves living there on its own and spends its time singing, gardening, dancing and reading.

One day The Pooka realises, it feels a bit lonely and misses its friends.

So decides to invite everyone to a great big party with music and cake!

I invite yoo to a

And lotz of cake.

Will anyone turn up?

Or will everyone turn up?

Come to the Pooka Party and find out what happens!

A magical and beautifully illustrated story about loneliness and the power of friendship, by highly acclaimed illustrator, Shona Shirley Macdonald. 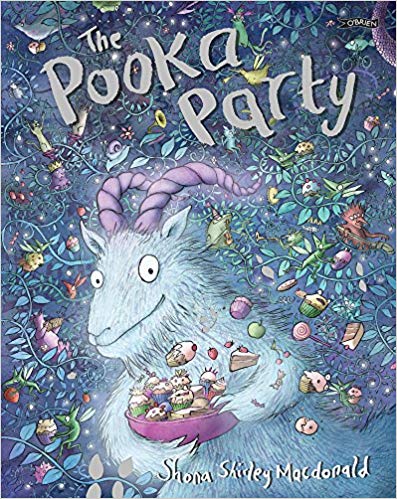 This such a cute book.  I absolutely adore The Pooka.  He reminded me a little of myself.  Those of us that like to spend time alone often get into the habit rather easily and then eventually we realise that it’s actually rather nice to see friends and this is exactly how The Pooka feels.  Even though he spends his time doing all the things he likes he gets lonely and misses his friends.  So he decides to have a party but has he left it too long?  Will they come?  A really lovely story that it super to read aloud and is full of fascinating and stunning illustrations that will give you plenty to talk about.

And if you’re wondering what The Pooka is…

The Pooka or púca (Irish for ghost) is a creature of Celtic folklore.  It is considered to be a bringer of both good and bad fortune and is said to enjoy creating havoc and mischief.  The Pooka, who usually lives in the mountains and hills, is a shapeshifter and can take any form it chooses: dog, rabbit, goat, horse, hare and even human form.

The Pooka Party was published by The O’Brien Press in hardback last year.

Thank you so much to the lovely people at The O’Brien Press for sharing this wonderful book with me.  It’s been a pleasure to read and share.

Shona Shirley Macdonald is a Scottish author/illustrator based in County Waterford.  Her published illustration includes The Moon Spun Round: W.B. Yeats for Children, edited by Noreen Doody, published by The O’Brien Press in 2016, Rita Kelly’s poetry retrospective Turas go Bun na Spéire and two Scottish Gaelic graphic novels, Cuir Stad air an Stoirm Shnaechda and An Smutag Ghaisgeil.  Her projects range from publications of poetry and fiction to concept artwork for theatre.