Today I’m delighted to be hosting the blog tour for another gripping offering from Orenda Books. Inborn by Thomas Enger is a thrilling court room drama that had me hooked and reading into the night. 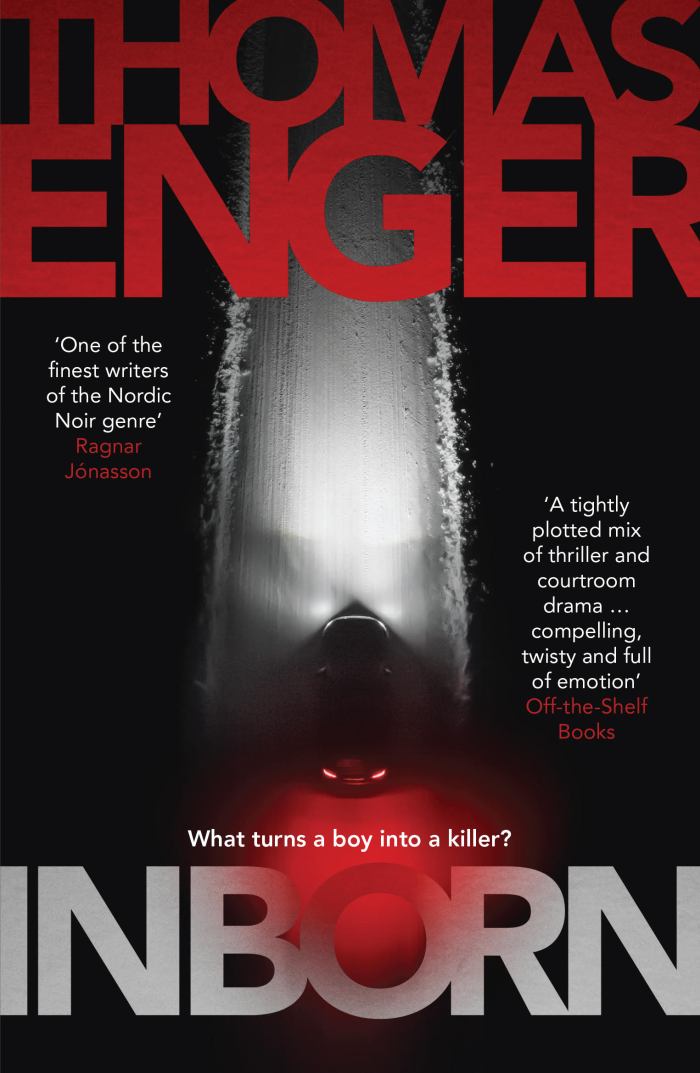 When a teenager is accused of a high-school murder, he finds himself subject to trial by social media … and in the dock.

A taut, moving and chilling thriller by one of Nordic Noir’s finest writers.

When the high school in the small Norwegian village of Fredheim becomes a murder scene, the finger is soon pointed at seventeen-year-old Even. As the investigation closes in, social media is ablaze with accusations, rumours and even threats, and Even finds himself the subject of an online trial as well as being in the dock … for murder?

Even pores over his memories of the months leading up to the crime, and it becomes clear that more than one villager was acting suspiciously … and secrets are simmering beneath the calm surface of this close-knit community. As events from the past play tag with the present, he’s forced to question everything he thought he knew. Was the death of his father in a car crash a decade earlier really accidental? Has his relationship stirred up something that someone is prepared to kill to protect?

It seems that there may be no one that Even can trust.

But can we trust him?

A taut, moving and chilling thriller, Inborn examines the very nature of evil, and asks the questions: How well do we really know our families? How well do we know ourselves?

Oh my, this is one good read. A chilling prologue leads us into the story where we follow young Johannes, a bright young soul, as he walks into something he really wishes he hadn’t. What follows is a series of events that we begin to witness through the trial when 17 year old Even takes to the dock.

Twists and turns aplenty my suspicions changed on many occasions. Wonderfully told mostly through the voice of a 17 year old the story keeps the fear, frustration and despair right on the surface. It brilliantly showed the dangers of social media. How it can be easy to condemn and spread hate and mistrust. Chinese whispers for the 21st century and a super way to throw in those clues (or red herrings).

You can’t help but feel sorry for Even; he has a difficult life with a reclusive younger brother and a mother who still continues to drown her sorrows some years after the death of their father in a car crash. The only sense of parental support comes from their uncle Imo. And now Even’s recently ex-girlfriend has been murdered and he is under suspicion.

I love the way Enger has built the story around the trial, hearing what Even has to say but also returning to past events with flashbacks through Yngve Monk, the Chief Inspector who has recently lost his wife and is floundering somewhat. He is also a great character though and I felt his loss keenly. Enger expertly portraying the sense of bewilderment and sadness that follows the death of a loved one. Monk really cares about the case too, determined to get to the bottom of what happened on that awful night he puts his grief to one side and gets the job done – with a little bit of help of course. The picture gradually becoming clearer and clearer until the shocking conclusion is revealed.

Absolutely gripping, this is one that I would definitely recommend for young adults and older readers alike. It is also crying out for a tv adaptation. There are plenty of skeletons in the closet of the people in Fredheim and they’re about to come out in a most spectacular but deadly way.

Thank you to Anne Cater for inviting me to be part of this blog tour and to her and Orenda Books for my eBook. As much as I prefer print copies I do LOVE the way I can read in the dark with an eBook. 🙂

Thomas Enger is a former journalist. He made his debut with the crime novel Burned in 2010, which became an international sensation before publication, and marked the first in the bestselling Henning Juul series. Rights to the series have been sold to 28 countries to date. In 2013 Enger published his first book for young adults, a dark fantasy thriller called The Evil Legacy, for which he won the U-prize (best book Young Adult). Killer Instinct, upon which Inborn is based, and another Young Adult suspense novel, was published in Norway in 2017 and won the prestigious prize. Most recently, Thomas has co-written a thriller with Jorn Lier Horst. Enger also composes music, and he lives in Oslo.

Like Loading...
‹ Dior – Designer of Dreams Exhibition at the V&A Museum
On The Come Up by Angie Thomas ›

Today on #talesbeforebedtime I chat about the amazing #wegoonforever by @sarahgovett @marottebooks A superb piece of #dystopian #fiction for both adult and YA readers. Visit the blog for more details. Link in bio. ❤️😊
Repost from @sarahgovett
Maddy full of chat.
This morning’s commute. ❤️ #walktowork
Repost from @cerrie.burnell
And now this. #theendofmen by @christinasweeneybaird @boroughpress #amreading