The Cliff House by Amanda Jennings

I’m so thrilled to be hosting today’s stop on the blog tour for The Cliff House by Amanda Jennings.

Some friendships are made to be broken

The Davenports, with their fast cars and glamorous clothes, living the dream in a breathtaking house overlooking the sea.

If only… thinks sixteen-year-old Tamsyn, her binoculars trained on the perfect family in their perfect home.

If only her life was as perfect as theirs.

If only Edie Davenport would be her friend.

If only she lived at The Cliff House…

Amanda Jennings weaves a haunting tale of obsession, loss and longing, set against the brooding North Cornish coastline, destined to stay with readers long after the final page is turned. 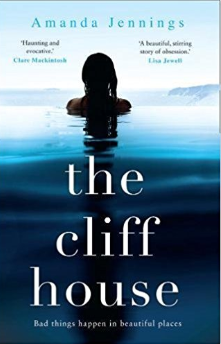 You sit and watch them from the same place you always do.

With my little eye.

The opening lines to this thrilling novel are sinister and full of meaning. The prologue setting the tone of the book from the get go. I read this in two days straight. I loved it. It held my interest and sparked a need in me to find out what happened and who indeed would become the victim in the end. I could feel it coming. The sense of foreboding that ran through the novel like a stream rushing towards the ultimate deluge when all was revealed.

The characterisation was fantastic. The different view points gave an interesting perspective on proceedings never quite allowing me to work out who I should feel sorry for, who was the victim and who was really injecting the posion that threaded its way through the story. I have my theory now but not wishing to spoil the story for you I’ll keep my thoughts to myself. Do message me though if you’d like to know.

The characters are complex, all damaged in their own way. This novel has so many layers. It looks deeply at how past experiences can taint our actions and lives forever but it also looks at how memories are never quite true but heavily influenced by who owns it. The same experience is never equally remembered by two different people and time has the power to change and alter events so that the reality can become grotesque and unbelievable in our self editing minds. We remember what we chose to remember from our own view point.

So what is the story about? The central character for me, is the house itself. Echoing faintly of Daphne DuMaurier’s Rebecca, The Cliff House not only takes the title but also takes centre stage. It seems to have a life of it’s own and possesses people in an unnatural way that makes them either love or hate it. Jennings has done a wonderful job of creating the atmosphere, providing the contrast of a hot summer in 1986 and the cold, sinister evil that seems to catch hold of both the occupants and visitors of The Cliff House.

As you read you know that things are going to go horribly wrong but you can’t quite work out what or who it will happen to. It was a thrilling read and one that lingers in my mind. I can almost hear the soft lapping of the water as Tamsyn swims through the still, dark water or the ‘caw’ of the raven.

Tamsyn has never recovered from the death of her father six years ago. The whole family have been suspended in their grief, doing all they can do to survive but never quite living. She takes solace in stolen visits to the house she and her father adored from afar when he was alive. The house they crept into to swim in the pool on the day he died. For Tamsyn there was always a part of her father still at the house and there wasn’t anywhere in the world she’d rather be. One day she sneaks back into the house only to be surprised by the early return of the owner and she soon becomes a part of the lives she has spent so long watching and idolising. And so begins a story of obsession and jealousy that can only lead to catastropy.

Amanda Jennings has a beautiful way with words. Her descriptive prose is stunning as she gets to the heart of the way her characters are feeling and sets each scene perfectly.

I turned my attention back to them all as they danced and screeched and smoked and drank. I was mesmerised by it all and relieved I’d stayed and not run back to St Just. This world was Wonderland and I was Alice. The characters around me were as weird and wonderful as the Queen of Hearts and the smoking Caterpillar and the Cheshire Cat’s floating smile. I thought of my father, hear the voices he used when he read me that story. Saw his face twisted into the manic grin of the Mad Hatter as he poured tea on the Dormouse. As I watched them they seemed to grow more fantastical. Their clothes brighter and more outlandish. I watched them pop whole eggs into their mouths, the eggs so tiny it gave the illusion they were giants.

Tamsyn longs to be part of the life at The Cliff House. She longs to run away from the pain and frustration of her family, a family left splintered by the death of her father.

He drags his feet up the stairs. He can never be the man he knows he should be. A man his father would be proud to call his son. While his mother worries about red-topped bills and food in their bellies, what does he do? Kicks around feeling sorry for himself. Moans about unemployment and the government and Tory wankers who live up their own arses. He smokes weed he can’t afford. Apathy is his constant companion, his Peter Pan shadow, sewn to his heels so he can never escape. It’s like he’s slipped into a waking coma. He is numb.

Just wonderful. I especially loved the line ‘Apathy is his constant companion, his Peter Pan shadow, sewn to his heels so he can never escape’

This was a thrilling, exciting read and one that I would thoroughly recommend.

The Cliff House is published by HQ, an imprint of HarperCollinsPublishers Ltd in Hardback on the 17th of May 2018.

You can find out more about author Amanda Jennings here.

3 years ago today this beauty came through my door. Still magical. #thenightimetfatherchristmas @actualbenmiller @simonkidsuk ❤️
My little snuggler. Keeping me company whilst in bed with a rotten cold. 🥰
Sunday afternoon. #themurderofrogerackroyd by @officialagathachristie #amreading
Repost from @hqstories
Earlier this week I took part in the #blogtour for #freckles by @official_ceceliaahern @harpercollinsuk - You can view my full post on the blog (link in bio) but here are my thoughts on this gorgeous, gorgeous novel.
Today’s bookshop buy. ❤️ #piranesi by #susannaclarke @bloomsburypublishing